The Nagasaki and Fukuoka Tiered Rice Fields are without a doubt some of the most pleasant and attractive scenery's within all of Japan.  They will take your breath away as they are the life and blood of the Japanese people and even today society still revolves around this staple of their diet, RICE!

The month long rains have ceased from the resulting rainy season, the newly planted Rice Fields are bathed in sunlight, fueled by the pure mountain water  and the necessary nutrients.  The rice seedlings are growing slowly day by day and yours truly can't get enough of the gorgeous scenery that is evident everywhere in rural Nagasaki.  You can literally see the rice stalks increasing in height and volume almost daily and every week their is a considerable change in its shape and size.  Nature working in tandem with the environment to provide us with a plentiful bounty.

Rice is the staple diet of this island and mountainous country.  Therefore it is necessary to grow the National staple in every nook and cranny that is available in order to feed the 130 million populace. And when i mean every nook and cranny i am not joking, the one thing about the Japanese is that for hundreds and thousands of years they have had to be ingenious about their efficiency and effectiveness to survive as a result of many physical, natural and environmental limitations.  As a result images of Nagasaki Rice Tiered Fields are a common sight which is great for scenery lovers such as myself.


Take a look at the video below to see what the Nagasaki and Fukuoka Tiered Rice Fields looks like:

Posted by Tour Nagasaki at 11:11 PM No comments:

The Camphor Trees are an amazing and worthwhile location to check out whilst you are in Nagasaki City.  The Camphor Trees have a trunk circumference of eight and six meters respectively are among the largest camphor trees in the city.  Both trees were broken at the upper portion on the trunk as a result of the 1945 atomic bombing and thus are now only about 10 meters in height.  However the branches have flourished to form a huge canopy measuring 40 meters east to west and 25 meters north to south.  Although stripped of leaves and almost killed by the atomic bombing, the trees eventually budded and regained their vitality.

Today they are a reminder that the human spirit (nature) has the ability to heal and regain its previous condition and in many cases become a better or stronger person in the process.  It is this hope and spirit that will help us all when in need and guide us when necessary.  A visit to the Camphor Trees will turn a bad day in a good one and a terrible mood into a happy one.  I sometimes come here to refresh the mind and the soul and can't help but be moved by what these tress had to go through to survive!

Another one of those inspirational stories that need to be seen to be believed!  An absolute must visit for anyone who wants to see, feel and breathe a good heart felt story of survival.  It just shows us that we should never give up and have hope for the future.

Check out these Camphor Trees on a map!

Click on the videos below to see the Nagasaki Camphor Trees in their present state today:

The Atomic Bomb Museum in Nagasaki is located in the park above the epicenter.  It's exhibits show the overwhelming destruction caused by the bombing while also telling us the importance of world peace and the removal of weapons to protect the Earth from something like this ever happening again!

It is a very sobering place and definitely not for the faint hearted as the stories, exhibits and pictures are extremely graphic.  There hasn't been a time when i haven't seen someone crying out loud and or emotionally uncontrollable.  This museum definitely isn't every one's cup of tea.  However, it is important to remember history and not to forget about the past as this is the way we don't make the same mistakes of the past.  So, in that sense the museum can be a great place to come together and never let this happen again for the benefit of mankind.

There isn't a lot of English posted but that might not be a bad thing as the graphic details definitely provides more than enough information to process at any given time.  Recommend that people really think about their desired objectives in what they want to achieve whilst in Nagasaki and this will basically provide the impetus of whether or not a Nagasaki Atomic Bomb Museum visit is warranted! I always give our Private Nagasaki Tour customers this choice to make for themselves.

Check out the Nagasaki Peace Park Museum on a map! 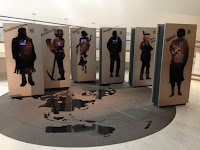 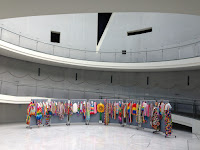 Here is a video taken from the roof of the Nagasaki Atomic Bomb Museum and shows the Peace Park below:

Posted by Tour Nagasaki at 10:46 PM No comments:

Buddhist Temple Carvings in Nagasaki is a special place and I found this one up in the mountainous areas around Isahaya.  This beautiful grotto has Buddhist Jizou sculptures, rock carvings of Bodhisattva's, waterfalls, fresh spring water, a Somen restaurant ( in summer only) and a temple.   A various times of the year you may see devotees standing under the waterfall, men in loincloths and women in white smocks with hands clasped in prayer praying for peace,  health and prosperity.  I am sure I could do this in the middle of summer, in fact I would pay for this experience but to do it in the middle of winter in the freezing water, there is no way you give give me enough money to compensate for the misery and hardship!

My first visit was during the rainy season so the water was flowing down the mountain freely.  I can tell you it is some of the clearest, cleanest and most delicious spring water I have ever tasted in my life.  The peacefulness is also something else I can't describe.  An amazing place with a certain magical aura about it!  Another one of those places that you need to see to be believed and I will absolutely be returning at other times of the year to get a real sense of the environment and its impact on the amazing nature throughout the different seasons.

The rock carvings are also very impressive and gathering by its size and the location (perched up on a side of a hill) I am sure the artist who produced these stone carving obviously took a long time to complete the task at hand.

Come and check out the Buddhist Temple Carvings on a map.

Check out this Buddhist Temple Carvings on the videos below:

The Buddha Entering Nirvana at the Kotoji Temple in Shimabara City was a place that I had heard about many times over but was of yet unable to find its true location.  Tucked away in a sleepy neighborhood location it is basically in the most unlikely area to find such a massive and powerful statue such as a Buddha.  To view the impressive and spectacular reclining Buddha as it is entering the state of Nirvana is awe inspiring and moving and really works to the core of one spirituality.

The statue measures 8.6m long and 2.2 m high and is a sparkling silver colour in appearance.  It was built in 1957 to honor Itakura Shigemasa, who commanded the Tokugawa Government forces against the rebels during the Shimabara Rebellion.  The statue is the longest reclining Buddha in Nagasaki and it lies within my backyard which I call the Shimabara Peninsular, incredible!!

To see the statue up close in its peaceful form was a real eye opener for me, especially since i am not Buddhist and don't know very much about the history of Buddhism.  After about 20 or 30 minutes the impact of the statue become more evident as one can achieve a level of inner peace in a non meditation way.  Well worth a visit and totally one of those surprise packets that one doesn't expect to find everyday of the week.  I am sure you will need at least 30 minutes here at this spectacular location as it has that wow factor that everyone wants to feel.

Please check out the Buddha entering Nirvana here on a map!

Please click on the video below to see the Nagasaki Buddha Entering Nirvana:
Posted by Tour Nagasaki at 9:20 PM No comments:

Saruba Shrine is located on the Shimabara Peninsular between Chijiwa and Obama Towns.  It is without a doubt one of the most interesting Shrines I have ever been to in Japan.

Firstly it is located on the top of a mountain which isn't a huge surprise as most Shrines are located as high as humanly possible in Japan.  However the effort and the time to get to the top of this one was an effort even for yours truly who is if I may say is very healthy and athletic.  This trek to the top isn't for the faint hearted or physically challenged.  In fact, I had to stop a couple times during this 30 minute marathon to take a breather.  The path looks and feels like a stairway to heaven and probably around halfway up the mountain I forgot count how many red Torii's (gate entrances) I passed through and I can tell you this, I wasn't going to start from the beginning and recount again!

The patron's of this unique and breathtaking Shrine without a doubt have the determination and fortitude to challenge themselves on a regular basis and by the face and look on one of the locals I passed on the way up nothing was stopping him from reaching the top to his ultimate goal.  Without a doubt, if there is a heaven he will get the keys to the pearly gates.

I would only recommend this place to the fit and adventurous and if you go on a cloudless day I promise you the views from the top will leave you speechless.

Click to see Saruba Shrine in Chijiwa, Nagasaki on a map:

Check out the pics for yourself:
Click to enlarge:


Click here to see Saruba Shrine Nagasaki in all its glory in the videos below:

Posted by Tour Nagasaki at 10:53 PM No comments: