There is this attraction in the middle of Saga Prefecture, away from any major highway and city center that is gathering a rather lot of attention these days.  It is called Oouo Shrine and a site that i have visited many times because of its uniqueness and incredible scenery it possesses.

The Shrine has 3 Torii gates that are strategically placed from the shoreline out into the picturesque and highly productive seaweed producing Ariake Sea.  At high tide all 3 gates are covered with water at various depths, whilst at low tide one can wander around and fully inspect each Torii Gate and get a feel of what a 6 meter tidal range really means from an environmental and nature point of view.


Although I have been here 3 or 4 times previously for some reason it is always at low tide.  Not that I am complaining because low tide obviously allows for more exploring and a chance to stretch ones legs after a drive of some sorts from the previous attraction.  However for comparison sake, I would love to have some high tide photos and videos because in reality one doesn`t know what kind of tide that they will get on the day so we just have to take the results in our stride.

Just in case you were wondering, even though this location is getting more and more popular, don`t worry, you will never feel crowded or unable to find a car park.  As a result of its very rural location hardly more than a trickle of sightseers and or cameramen are here at any onetime.

Please click here to see the Oouo Shrine on a map: 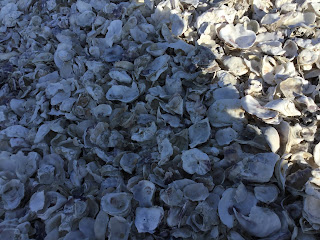 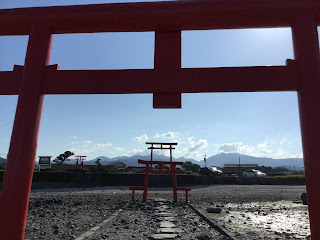 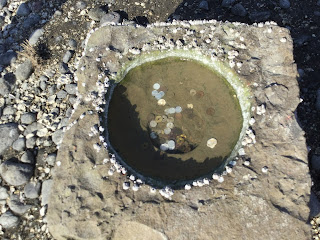 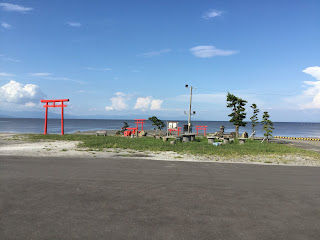 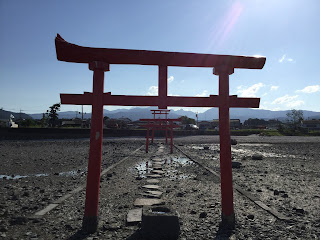 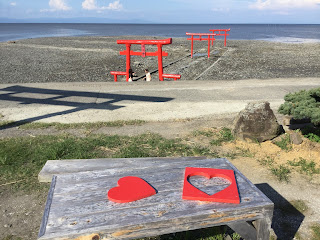 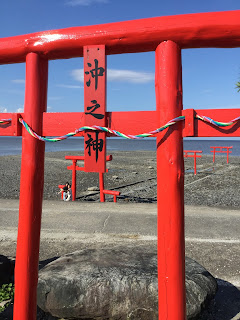 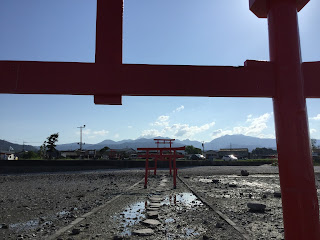 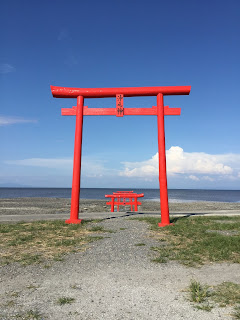 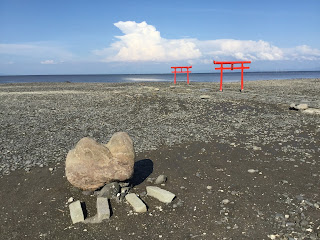 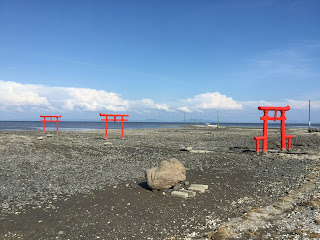 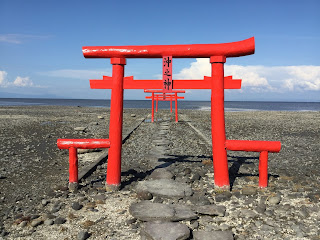 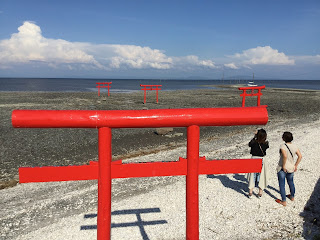 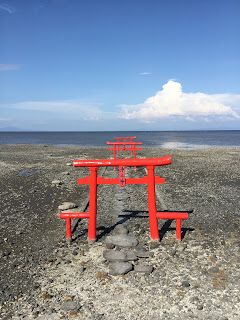 Please click on the videos below to see more about this incredible attraction.

Posted by Tour Nagasaki at 9:36 PM No comments:

Our most popular Shore Excursion is absolutely the Nagasaki City and Shimabara Peninsular Day Tour. A perfect combination of natural, cultural and special experiences that will last you and your party a lifetime.

Please enquire what we can do for you on your day out in Nagasaki.

Check out this private tour on the video below:

Posted by Tour Nagasaki at 6:58 PM No comments:

The One Legged Torii Gate in Nagasaki City (gate entrance of a Shrine) is well known as one of the unanticipated consequences of the atomic bomb blast on August 9, 1945.  The epicenter of the bomb's destructive force was located approximately 800 meters from the Shrine and as a result, one support column was knocked down but the other somehow remained standing, even though it was rotated about 30 degrees on its pedestal base, and facing another direction than its original position.

Just to stand here now and see the remnants of the bomb and its effects on Nagasaki makes one realized how significant life really is. "The One-Legged Torii bears the scars of traumas past and still stands with determination" is a famous quote I once heard that really resonates with me and provides me inspiration whenever I am going through a tough time and need to re-evaluate what is really important in life.

The One Legged Torii Gate a real find and a place that pictures just don't do justice.  A little word of warning though, the actual location is situated above the road level and quite an amount of stair climbing is involved in getting to the place in point.

Pictures can be taken from below and will give you a sense of the power of the atomic explosion all those years ago but of course to get up close and personal and to touch the monument will give you so much more of a connection.  You will just have to conserve the amount of stairs you climb during the day and save them all up for the last and biggest climb of them all, you won't be disappointed!

Our Private Nagasaki and Shimabara Tours nearly always visits this site at the end of the day before returning to the Nagasaki Port which is only 10 minutes away.

Check out the One Legged Torii Gate in Nagasaki on a map!

Please check out the One Legged Torii Gates in the videos below:

Posted by Tour Nagasaki at 9:28 AM No comments:

Without a doubt the most popular private tour that we consistently deliver on is the Full Day Nagasaki and Shimabara Peninsular Shore Excursion.

Even on the days when the weather isn`t behaving our private tour groups always end the day with a smile on their faces albeit a little tired from exploring and experiencing all the interesting and cultural itineraries on the day.

Here is another successful tour that was recently completed.
Please check the video below to see all the attractions we visited on that special day together in Nagasaki.

Posted by Tour Nagasaki at 9:36 AM No comments:

Shimabara Castle is located between the Ariake Bay and Mount Unzen on the Shimabara Peninsular.  The outer moat is 15 meters deep and between 30–50 meters wide, extends 360 meters east-west and 1260 meters north-south.  The main building has five stories,  a height of 33 meters and is connected to two secondary buildings, each with three stories.

The Arita Clan (Christian ruler) ruled over the domain from Hinoe Castle and Hara Castle.  After the start of the national isolation policy the Tokugawa Regime banned Christianity from 1614 and replaced Arima with the Matsukura Clan.  Matsukura, who strictly enforced the prohibition against Christianity with mass executions, also severely raised taxes to pay for the construction of his new Shimabara Castle from 1618-1624.  This oppression of the peasants was a major factor leading to the Shimabara Rebellion.  Shimabara Castle Nagasaki came under siege during the Shimabara Rebellion but was not damaged.

Today only the moat and stone walls remain from the original structure.  In 1980, a memorial museum was opened in honor of Seibo Kitamura, a noted sculptor and designer of the famous Peace Statue at the Peace Park in Nagasaki City.  In 2006, the Shimabara Castle was listed one of the 100 finest Castles in Japan by the Japan Castle Foundation.

Sometimes I am in awe when i am driving down the hill from the mountain and the Shimabara Castle suddenly appears in the foreground.  A real Castle that operated over 400 years ago and still remains today albeit a restored type but really portrays the history and the real life setting of what life was like in Japan in the 17th century.

An absolute must visit for visitors to Nagasaki to inspect its history and beauty.  Always rated very highly by our Private Tour Groups.

Check out the Shimabara Castle Nagasaki on a map!


Click on the videos below to see some performances by the staff at the Shimabara Castle:


Check out Shimabara Castle Nagasaki on this videos below: