Huis Ten Bosch in Nagasaki is a theme park that recreates the Netherlands by displaying real size copies of old Dutch buildings. The name Huis Ten Bosch literally translates into English as "House in the Forest" and  is named after one of the three official residences of the Dutch Royal Family.

The park features many Dutch-style buildings such and features many parks which are planted with seasonal flowers. Huis Ten Bosch Nagasaki opened on March 25, 1992, is located in the southern part of Sasebo. Its location reflects historical relations between the Netherlands and Japan, which began in 1609 when a trading post was opened by the Dutch.  The Dutch were a major trading partner of the Japanese for centuries and especially when the country was completely closed off from the rest of the world for over 200 years, it was only the Dutch that were allowed to trade as their rather non political religious beliefs were seen as able to deal with compared to the Spanish and Portuguese hard line Catholics.

Huis Ten Bosch Nagasaki recorded a peak of 4.25M visitors in 1996 and is well worth a visit.

As quoted in the Huis Ten Bosch website,
"It has various activities and attractions from adults and children alike and you can lose yourself and enjoy the natural surroundings and immerse yourself in the culture and natural beauty."

Today, the numbers aren't as high as they once were so realistically you never feel overcrowded and there is a lot of space available to wander around and see the impressive sights!

Realistically you do not need a Private Tour in order to see and do Huis Ten Bosch.  It is accessible by public transport, bus and train and well signposted in English.  However if you would like to combined Huis Ten Bosch with other attractions in the are or do a 2 day/ 1 night tour option then it is a great location to include in your itinerary.

Check out Huis Ten Bosch Nagasaki on a map! 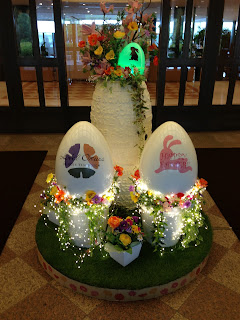 Posted by Tour Nagasaki at 9:20 PM No comments:

Christian Tombs in Fukae, Nagasaki is just one of the many areas all around the Shimabara Peninsular that still today allow us to step back in time and see that this area once was a hive of Christian activity.

Once upon a time, 400 to 500 years ago when Christianity was free to spread and the chance to learn was available (many Christian learning institutions were built)  the influx or Portuguese traders and diplomats into Japan during this period of expressive freedom and religious independence created a wider Christian community within the Shimabara Peninsular and Nagasaki in general.

Of course today, although Christian are far and few between the remnants of yesteryear still remain with Tombstones dotting the landscape.  Here in Fukae, there are just such tombstones that can be freely viewed and inspected to remind us of the Christian past.

It must be noted that these Christian Tombs are not ordinary in the lest!  The massive and mighty Fugen Mountain with its newly formed Lava Top are quite obvious and feel like they are so close to touch even though in reality they are kilometers away.

Check out the Christian Tombs Fukae Nagasaki here on a map!

Here is a video of the Christian Tombs Fukae, Nagasaki:

Posted by Tour Nagasaki at 9:21 PM No comments: