The Fat Man Atomic Bomb is the code name for the atomic bomb that was detonated over Nagasaki on August 9, 1945.  It was the second of two nuclear weapons to be used in warfare to date (the other being The little Boy over Hiroshima) and its detonation caused the third man-made nuclear explosion.

The Atomic Bomb was an implosion type weapon with a plutonium core compared to Hiroshima that was a Uranium type weapon therefore its intensity and detonation impact was expected to be many times more powerful and destructive than that of Hiroshima days earlier.

At the moment of the explosion there was a brilliant flash of light, ten seconds later an enormous roar sounded and a fearful blast swept across the area.  Sharp rays of heat emitted massive amounts of radiation all over Nagasaki within seconds and because there were no barriers to the spread of radiation huge amounts of Nagasaki, were destroyed almost instantaneously. 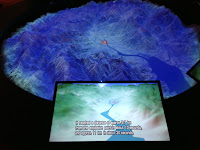 People didn't feel anything abnormal, as this radiation didn't produce sound or heat but in actuality it had permeated deep into their bodies and affecting them greatly.  The temperature directly under the explosion was estimated to be somewhere from 3,000 to 4,000 degrees Celsius.  The force of the blast and the heat rays unleashed immediate destructive power and then fires broke out which severely damaged one third of the buildings in the city with all buildings inside a 2 kilometer radius of the explosion burnt to ashes.

Above are a coupe of images that i took from the Nagasaki Peace Park Museum that shows the full destructive powers of the Nagasaki Fat Man Atomic Bomb and its course of destruction.

Please check out the Fat Man Atomic Bomb at the Nagasaki Peace Park Museum here on a map:

PS: Our Private Nagasaki Tours can include a visit to the Atomic Bomb Museum however I warn everyone before hand that some of the exhibits and stories can be quite powerful and tear jerking.  Proceed with caution!

Posted by Tour Nagasaki at 9:53 PM