Mitsubishi Shipyards in Nagasaki is such a dominate and striking feature of the Nagasaki Port and the city itself.  It is virtually impossible not to see a dozen of so unmistakable Mitsubishi Company Logo's throughout the area and it is still today one of the largest employers in Nagasaki.

In 1857 at the request of the Shogunate engineers began work on a modern, Western-style foundry and shipyard  and construction was completed in 1861.  In 1868, the shipyard was placed under control of the new Meiji Government and the first dry dock was completed in 1879.

From a boat on the harbor or from the shoreline you can get some great shots of this dry dock in fully operation and there is always a huge ship or tanker or two getting some repairs that can be seen. Without a doubt one of the most impressive harbors of the world.

Come and check out Mitsubishi Shipyards Nagasaki on a map: 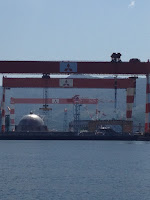 Here is a video of the Mitstubishi Shipyards in Nagasaki:

Posted by Tour Nagasaki at 8:48 PM