The Kita Arima Christian Monument is a symbol of the many Christians who died for their Christian faith mostly during the 17th century.  There are many of these statues, monuments, reminders, posts, tombstones and the like all over the Shimabara Peninsular in Nagasaki as this area of Japan was a hive of Christian activities during the 16th and 17th centuries.  I have been discovering and searching for these site for a while now and more keep popping up all over the place.

In 1549, St. Francis Xavier and two other priests arrived in Kagoshima to bring Christianity to Japan from Spain. There were an estimated 300,000 Christians by the end of the sixteenth century. Problems arose and Christianity was suppressed and the first Martyrs of Japan died in 1597.  250 years later, when Christian missionaries returned to Japan, they found a community of Japanese Christians that had survived underground and were approached cautiously by the descendants of the Christians after their suppression.

There were 205 Japanese Christian Martyrs between 1597 and 1637.  One of these incidents is documented with a Nagasaki Christian Monument in the town of Kita Arima on the Shimabara Peninsular.  Here 29 Christians were martyred in the Arima River, death by drowning for not renouncing their Christian faith, in times where Christianity was banned throughout all of Japan by the rulers.  It was quite an intense feeling to be at the site of such atrocities that were committed so many years ago but as with all shocking incidents it is better to learn from our past rather than hiding the real truth!

Please check out the Kita Arima Christian Monument on a map:

Please click on the video below to see the Kita Arima Nagasaki Christian Monument:

Posted by Tour Nagasaki at 11:37 PM No comments:

Nagasaki comes alive at night!  As the sun sets and the streetlights start to take effect, the whole city seems to jump to life and take on another character.  The streetcars seem to be everywhere, ruminating the city as they transport hundreds and thousands of passengers to their destinations of choice.

People are moving, cars are weaving in and out of traffic and the smells of various food waft into the air to tempt those passerby's into entering the establishments.

Nagasaki is a sight to see and behold and I try and make it into the city once a month to feel and interact with her.  The tasty morsels sold by the street vendors are more than you have ever bargained for.

Check out Nagasaki Streetlife here on a map: 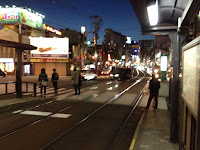 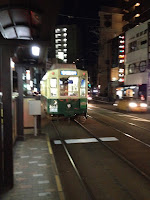 Posted by Tour Nagasaki at 2:54 PM No comments: