The Isahaya Bay Dike Road in Nagasaki is one of those projects that creates a divide between the interested parties, tears up the local community and the outlying areas of concern as well as creating a lose/lose situation whereby everyone involved feels like they have been wronged by the forces against them.  It is this sort of project, a white elephant so to speak that pins friend against friend, allocated money to those that dare not speak up and most of all ruins and completely destroys a pristine environment and habitat that has been lost to big business and Japan INC.

The Ariake Sea which flows into the Isahaya Bay is a large shallow sea bay with many estuaries and the largest area of intertidal mudflats in Japan. The mudflats extend in fingers for up to 7 km out from the estuaries of the many rivers entering the bay. The total area of mudflats continues to decrease as more and more land is retained within concrete banks and reclaimed for agriculture.  The average depth of water in the bay is 20m (maximum of 130m), and the maximum tidal variation is 5-7 m.
Isahaya Bay, one of those four major mudflat areas, has now been dried up since the official shutdown of 7-km-long Sea Wall on the 14th April 1997.

The sea wall cut off the water of Isahaya Inner Bay from the Ariake Sea. Isahaya Bay deserves the status of a wetland of international importance however the Japanese Ministry of Agriculture, Forestry and Fisheries claims that the project is inevitable for flood control and more agricultural lands.

Although many of Japan's wetlands have disappeared as a result of rapid development in the recent past, the country still possesses a wide diversity of wetland ecosystems of considerable importance for wildlife including a number of threatened species. Many protected areas have been established, and considerable efforts are being made by the conservation bodies to prevent further wetland loss. However, the pressure on wetlands remains severe, particularly from canalization of river channels and conversion of coastal marshes and mudflats to agricultural land and industrial development.

Although in some regard this project has saved lives and created a new road that has reduced traffic congestion in the area, the project itself cannot be justified as a result of the damaged caused and the ongoing internal struggles of the community as a whole to rectify the conflict and solve the issue of remuneration and compensation to those groups that have been affected over the 30 year project life.

An issue that isn`t going away and probably won`t for many years to come.

I nearly always drive across the Isahaya Bay Dike Road on my Private Nagasaki Tours as its a beautiful straight road, has amazing scenery and gives everyone a chance to stretch their legs and have the all important bathroom break. 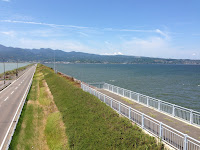 Take a look and feel of the Isahaya Bay Dike Road Nagasaki from a birds eye view on the videos below:

Posted by Tour Nagasaki at 1:12 AM