Yamazato Air Raid Shelters Nagasaki are located on the grounds of Yamazato Elementary School and are possible for viewings but only on weekends and holidays as during the week regular school classes are held at this working Elementary School.

In early 1945 as the war effort reached a fever pitch, an air raid shelter was dug at the Yamazato Elementary School, located about 600 meters north of the hypocenter, in order to protect the lives of the pupils from anticipated air attacks.  After the atomic bombing, burned and injured children, teachers and neighborhood residents crowded into the shelter, where ultimately most of them died.

Although the Yamazato Air Raid Shelters Nagasaki are now closed and chained off to the general public, their images still give you chill as you can nearly see and feel the fear and cries of desperation on the children as they struggle to find friends and loved ones and desperate just for one drop of water to quench their thirst.

The Yamazato Elementary School site also has a Children's Memorial which was erected in November 1949.  A small girl clad in traditional farm-style clothing kneels in prayer amid the flames ignited by the atomic bomb.  This memorial was erected upon the suggestion of Dr. Nagai and was paid for with funds donated by him and with royalties from the book "Living Under an Atomic Cloud", a collection of excerpts taken from the diaries of pupils who survived.  It is dedicated to the memory of the 1300 pupils and teachers who died as well as their families.

This place and its remaining Memorials certainly is a sombre and sad place to visit.  It is very hard to try an imagine all the children, teachers and innocent people that were affected by the viciousness of war.  It is from these places that we can learn to forgive the wrongs of the past and build a better future for our children, one where war and terror can be eliminated from the horizon.

A must see but only on weekends as on weekdays regular school classes take place!

Come and check out Yamazato Air Raid Shelters Nagasaki on a map: 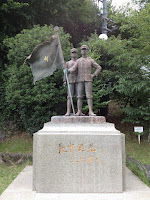 Click on the videos below to see more of the Yamazato Air Raid Shelters Nagasaki:

Posted by Tour Nagasaki at 7:39 PM