The Old Chinese Settlement in Nagasaki was home for many Chinese sailors and traders who traded goods with the Japanese from the 15th to 19th centuries.  The Chinese Traders came to Nagasaki because it was the only "open port" to visit Japan at this time.  The Government at the time only allowed Nagasaki to stay open throughout all of Japan and closed off Japan to the rest of world from western foreign powers in order to prevent the spread of Christianity.

Strict rules were placed on these Chinese to never be outside their settlement at night and they were not allowed to live outside of the gates that kept them virtual prisoners inside the gates.  However at least the Chinese Settlement was on the mainland within Nagasaki City.  The Dutch, who were the only other traders allowed to enter Japan at that time because their Religious beliefs were not as severe as others such as the Portuguese, had to live on an artificial island just off the mainland and weren't even allowed to step on the mainland itself, business had to be conducted on the island called Dejima.

Today a  great walking course around the old areas of Nagasaki city exists and it is possible to step back in time and see how the Chinese lived in a limited way all those years ago.  Well worth a stroll around the oldest area of the city and to look at the buildings erected centuries ago.  If the old walls of the Old Chinese Settlement could talk you would be able to play a game of Chinese Whispers?

See the Old Chinese settlement on a map!

Check out the Nagasaki Old Chinese Settlement in the video below:


Posted by Tour Nagasaki at 9:39 AM No comments:

Chinatown is located in the centre of Nagasaki City and is also known as Shinchi. There you will find four gates facing in four different directions.  These gates are called the Seiryu-mon,  Byakko-mon, Suzaku-mon and Genbu-mon, with the suffix mon meaning gate in English.

Nagasaki`s Chinatown is a major draw card for tourists who seem to flock here in major numbers so you have to be careful to avoid the constant rush of people and the non stop clicks of cameras going off left, right and center!

There are many Chinese restaurants and stores selling Chinese goods throughout the area, allowing you to enjoy a bit of Chinese flavor in Nagasaki.  During the Chinese New Year this place serves as the center of the Nagasaki Lantern Festival, which is the feature winter event in Nagasaki. The whole area is decorated with many Chinese lanterns, drawing crowds of people from all around Japan and the world.

It's a great place to take a walk, lose yourself in a different part of Japan and soak in the rich history of the area.  The Chinese were major traders in the area for centuries and their presence can still be felt today reaching out to the masses.  The food here is very authentic as I am sure the traditional Chinese recipes have been passed down from generation to generation to carry on the traditions and make sure their culture remains strong and intact.  So, if you want some Chinese food that is as good as what it is in Shanghai then Chinatown is the place to come and experience its amazing flavors and smells.

Click here to see Nagasaki`s Shinchi Chinatown on a map! 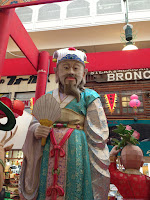 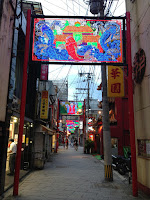 Have a look and feel Nagasaki Shinchi Chinatown on the video below:

Posted by Tour Nagasaki at 10:02 PM No comments:

Dejima Island in Nagasaki was the sole trading spot with foreign countries from the 17th to the 19th centuries.  It is a island with a 400-year history of Dutch trade.

Dejima was an artificial island built in the shape of a fan with an area of about 13,000 square meters. It was built south of the current city center during the Edo Period in order to accommodate Portuguese Christian missionaries and prevent the propagation of their religion. It also used to be the residential quarters of the Dutch, the only foreigners allowed to trade in Japan during the Sakoku (Isolation) Period and a Dutch Trading House operated on the island. For 200 years, until Japan reopened the country in the 19th century, Dejima was its only window to the world compared to the rest of Japan that lived in complete isolation from all things foreign.

Today, Dejima Island has been preserved and is an excellent example of what life was like in Japan and particularly Nagasaki 300 years ago.  The buildings have been painstakingly reformed to their original condition and the gardens are well looked after.  Someone could spend anywhere from 30 minutes to 2 hours just strolling around and being transported back to past.  Inside Dejima Island  there is a model replica of the entire island that has been made in order to show exactly what the island looks like in tiny detail with retaining wall and moat to boot.   This replica by itself took up about 20 minutes of my time as I studied and screened everything.  Absolutely amazing!!

Dejima is another one of those locations that is situated near the International Port Terminal thus walking distance and an easy to find attraction.  Combined with Glovers Gardens this make a perfect half day walking and history tour of Nagasaki.

Click on the link to see Dejima Island in Nagasaki on a map!

Check out Dejima Island Nagasaki on a video below:

Posted by Tour Nagasaki at 9:51 PM No comments: