Saint Philip Church in Nagasaki is on Nishizaka Hill where the 26 Martyrs are situated.  The Church is named after a Mexican Martyr who was one of the 26 saints that was killed by the Shogunate powers which banished Christianity in the 16th century.  His bust can be witnessed along with the other 25 martyrs at the Nishizaka Landmark which has such as power message and image of sacrifice and willpower to defy the orders to renounce Christianity within Japan.

The 2 towers soaring from the church are 16 meters high and the church has becomes one of the most visited landmarks in Nagasaki.  The museum and church was designed by Kenji Imai (1895-1987).  Here is some background information of the unknown designer and architect.

The architecture of the church is unique and any fans of the works by Gaudi will immediately recognize the similarities.  So, if you are a follower of Gaudi's works or just like to visit interesting places then i am sure you will come away with a positive image of this place.  It will be impossible to just spend 10 to 15 minutes here, budget on at least 45 minutes to an hour as every aspect of this building will attract your eye and demand further detailed inspection.  This location is a great place to talk a walk and just breath in the history and atmosphere that remains today. 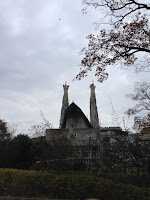 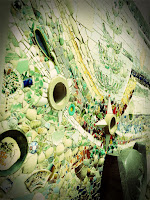 Please take a look at this video to see Saint Philip Church Nagasaki in more detail:

Posted by Tour Nagasaki at 9:19 AM