The Damaged Houses were a direct result of the Unzen volcano explosion and there has been several major eruptions in its history.  The volcano erupted most recently from 1990 to 1995, sending pyroclastic flows (superheated clouds of volcanic gas and ash) down toward the towns below. While most people were safely evacuated, 43 journalists, scientists and their taxi drivers were killed. The eruptions also destroyed buildings on the outskirts of Shimabara City.

Much of the volcano's destruction was due to large mudflows of volcanic ash, which flowed down the mountainside burying several homes and buildings that lay in their path.   These houses  are preserved in their original state and protected under a dome.  It is a surreal feeling if not quite eery sight to see these houses in their present state whereby once they were part of a thriving community with food smell wafting from the kitchens and sounds of children running around outside.  However it is important to know and respect the natural disasters that lay waiting for us

The Damaged Houses are a great way to see and feel the destructive forces of nature in play without being in its direct path.

Have a look at the Volcano Damaged Houses on a map! 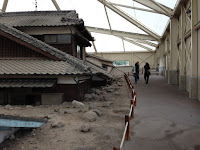 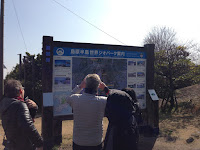 Posted by Tour Nagasaki at 11:52 PM No comments: