Famous Nagasaki Suwa Shrine is the major Shrine of Nagasaki and home to the revered Nagasaki Kunchi Festival.  It is located in the northern part of the city on the slopes of Mount Tamazono and features a 277-step stone staircase leading up the mountain to the various buildings that comprise the shrine.

The official date of construction for Suwa Shrine is 1614, the same year as Tokugawa Ieyasu`s edict against Christianity.  Although there was little more than a small structure to mark the position of the future shrine at this time, it has grown into the massive structure and many sub structures that we see today.

Suwa Shrine survived the Atomic Bombing of Nagasaki on August 9, 1945.  It is thought to have survived intact due to its strategic location in the central part of Mount Tamazono southern flank.  In the aftermath of the bomb local residents were quick to note that while the famous Urakami Cathedral and surrounding Catholic neighborhoods were obliterated, the Shinto Shrine still stood. This was considered to be significant by the survivors of the bombing, showing the power of the native Japanese Gods as opposed to the imported Christian God.  In addition, Priests from Suwa Shrine took an active role in the rebuilding of Nagasaki, including consecrating the land and purifying structures that still stood after the fact.


The most famous of Suwa Shrine's festivals is Okunchi.  This festival began along with the founding of the shrine as a way to both demonstrate its new importance in the community and as a way to hunt for Hidden Christians.   Kunchi is held from October 7th to 9th every year and is considered one of the major festivals in all of Japan.  It has been designated as an Important Intangible Cultural Asset.


As of yet I haven't had the privilege to attend the annual Okunchi Festival as tickets and locations are had to obtain because of the popularity but around the city there are many complimentary places whereby free viewing performances of various dances and exhibitions are available to the general public.  It is absolutely on my to do wish list and I will be making this one of my "Must Do Nagasaki Experiences".


Check out Famous Nagasaki Suwa Shrine here on a map: 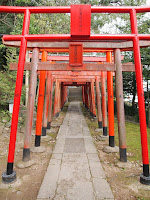 Check out the videos of Famous Nagasaki Suwa Shrine below: