The Unzen Christian Memorial is a very special place indeed.  It is hard to believe that such a special, unique and picturesque place was actually a murdering ground for the prosecution and killing of Christians all those years ago in feudal Japan.

During the depression of Jigoku (1627-1632) many Christians were killed.  Though it is impossible now to indicate the exact place in which many Christians suffered martyrdom, two monumental stones were placed in the Jigoku (Hell Ponds) to honor the Martyrs.  One is called "Seika Moyu no Hi," (monument of sacred flame) which was built in 1939.  The Japanese poem written by Chosuke Ikuta is inscribed and reads "Your exalted spirits and sacred red blood have never faded away and are still vividly seen through the red mountain covered by azalea flowers."

The other monument is of the Christian Cross and was raised by Archbishop of Nagasaki in 1961.  On the surface of its setting stone, 6 martyrs' names are inscribed to keep the plight of these people many years ago alive and in the memory of all Christians of today and yesteryear.  It is a place that one can lost in the magnificent scenery not to mention the history of the area and at the same time you can learn about the Christians of Japan and the persecution that they had to endure in order to follow their faith.

Check out the Unzen Christian Memorial on a map: 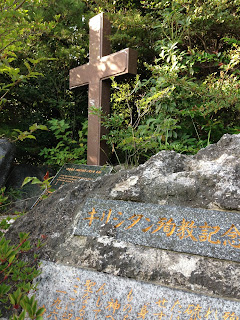 This is where it all happened!

The memorial stands to remember the Christians of the time

Many Nagasaki Christian were martyred here!

Please check out the video of the Unzen Christian Memorial here:

Posted by Tour Nagasaki at 7:17 PM No comments: