Miguel Chijiwa`s Statue is displayed in Chijiwa Town, Nagasaki.  He was born in 1569? and died January 23, 1633.  He was a member of the Japanese delegation to European Christendom which is also known as the Tensho Embassy.


The idea of sending a Japanese embassy to Europe was originally conceived by the Jesuit Valignano and sponsored by the three Christian Daimyo's.  Mancio Itō was chosen to act as a spokesman for the group.  On February 20, 1582, Mancio Itō left Nagasaki in company with three other noblemen:


The ambassadors arrived back in Japan on July 21, 1590. On their eight-year-long voyage they had been instructed to take notes. These notes provided the basis for "The Mission of the Japanese Legates to the Roman Curia", a Macau-based writing by Jesuit Duarte de Sande published in 1590.

The four were subsequently ordained as the first ever Japanese Jesuit fathers by Alessandro Valignano.

Martinho Hara was banished from Japan by the Tokugawa Shogunate in 1614, and acted in Macau. He died in Macau on October 23, 1629.

Miguel Chijiwa seceded Society of Jesus before 1601 and died in Nagasaki on January 23, 1633. The reason of his secession is uncertain.

Julião Nakaura was caught by the Tokugawa Shogunate, and died a martyr by torture in Nagasaki on November 21, 1633. He was beatified on November 24, 2008.

It is so interesting to have so much Christian history available and right at my doorstep. My neighbouring town, Chijiwa was named after Miguel Chijiwa and his statue is proudly displayed right in front of the Town Hall for all to see and admire.

Christians in the day in Japan

Check out the Miguel Chijiwa Statue in Nagasaki on a map! 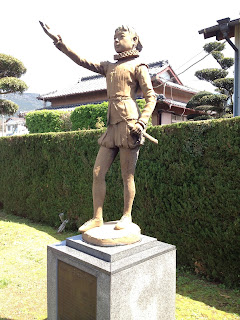 Posted by Tour Nagasaki at 8:33 PM