Mount Fugen in Nagasaki is the second highest peak of Unzen which dominates the Shimabara peninsula.  Mount Fugen is well known for its volcanic activity that last peaked in a period from 1990 to 1995.  Even today, many reports about volcanoes  invariably mentions Unzen when it comes to massive pyroclastic flows.  The most severe occurred on June 13, 1991 when 34 people were killed in an area that was rated as safe.

On my Private Nagasaki Tours, and only when the weather deems so, I will drive to the lookout and give everyone the opportunity to see the Volcano and Lava Dome up close.  It`s a tremendous and uplifting site for sure. 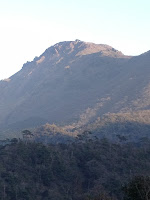 Currently, the two highest peaks of Unzen are Mount Fugen (1359m) and Heisei Shinzan (1483m). Until the last period of volcanic activity, Mount Fugen was the highest point in the Unzen complex. It lost this title with the growth of a new lava dome that has been named Heisei Shinzan.  At 1483 meters, the new peak outperforms Mount Fugen by more than 100 meters.

Mount Fugen makes for a fantastic access point from the Unzen Hot Spring town and can be well combined with a visit of Shimabara to the east as well as the town of Obama to the west for a great day out!  Combine all 3 places and your day will just about be perfect from every point of view.

Mount Fugen Nagasaki is one of my favorite places to visit, just to see the huge lava dome sends shivers up my spine no matter where I am standing on the Shimabara Peninsular.  Mount Fugen Nagasaki can be climbed, it can be viewed also in various way, one by walking up to the lookout which is only about 200 metres from the carpark but there are quite an amount of stairs to contend with and secondly from the ropeway which will take you right up to the peak and within the parameters of its heart and soul.  I am sure it will provide you with a similar moving experience where ever it may be viewed from.

Look at Mount Fugen in Nagasaki Prefecture on a map!

Posted by Tour Nagasaki at 8:28 AM