The 26 Martyrdom Site in Nagasaki City was built on Nishizaka Hill on June 1962 to commemorate the 100th anniversary of the canonization of the Christians executed on the site on February 5th 1597.

26 people had been arrested in Kyoto and Osaka on the order of Toyotomi Hideyoshi (the national ruler) for preaching Christianity which had been outlawed at the time . They were imprisoned, then later marched approx. 800kms through the snow to Nagasaki, so that their execution might serve as a deterrent to Nagasaki's large Christian population. Hung up (crucified) on 26 crosses with chains and ropes, the Christians were martyred in front of a large crowd.

Today, the site is a revered as a holy site for pilgrims from within Japan and abroad!  In today's society it is hard to believe that something like this even took place but one has to remember the fight, battles and wars between countries and people to protect their independence and to fight against injustices brought upon them by the rulers and Governments of the time.  Considering all this one can realize that events like this did occur and should be remembered through Monuments and ceremonies highlighting their struggles and ultimately their lives.

Seeing the busts of the 2 boys within the 26 Martyrdom Site Nagasaki was especially difficult to fathom but I guess in order to really make the strongest point possible to the citizens of Japan and especially Nagasaki the powers to be at the time decided to make an example of the youth which would have been extremely difficult for the believers and those at a crossroads in their religious developments.

Well worth a visit and a stroll down memory lane although i must warn you the site can pull at your heart strings.

Check out the 26 Martydrom Site in Nagasaki City on a map: 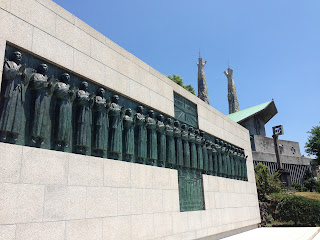 Here is a video showing the 26 Martyrdom Site in Nagasaki:

Posted by Tour Nagasaki at 8:50 AM No comments:

The Nagasaki Bomb Epicenter is a stark reminder of what happened all those years ago where in an instant, mankind unleashed its fury on civilization for generations to deal with the repercussions in the future.  It is for this reason that we need to remember and to discuss the shortcomings of mankind to make sure this sort of action is not repeated in the future for our generation and the many that are to follow in our footsteps.

The bomb that was dropped on Nagasaki was a plutonium bomb, which is said to have been about three times more powerful than the uranium bomb dropped on Hiroshima.  The bomb was 3.2 meters in length, 1.5 meters in diameter, and 4.5 tons in weight.  It exploded about 500 meters above Matsuyama Town at 11:02 a.m. on August 9, 1945 on that frightful day nearly over 70 years ago now.

This statue shown below in the picture is the exact location of where the bomb would have landed had it detonated upon impact with the ground.  It is a surreal feeling to try and contemplate the enormity of the situation but I guess it is necessary to remember in order to not make the same mistakes in the future and to learn from the past.

A must visit location when in Nagasaki as the Nagasaki Bomb Epicenter sits in a lovely park adjacent to the main Peace Park and only a short distance to the Atomic Bomb Museum, so one can basically kill 3 birds with 1 stone and see all the major attractions in the area in a short period of time, thus maximizing satisfaction.


Check out the Nagasaki Bomb Epicenter on a map! 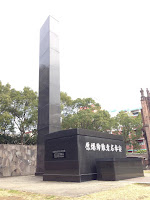 Posted by Tour Nagasaki at 9:00 PM No comments:

The Nagasaki Spectacles Bridge is one of the main attractions in the center of the city.  Located just a stones throw away from Chinatown it isn't unreasonable to visit both locations within a short period of time especially for those visitors that don't have a extended period of time in the city.

The bridge was built in 1634 during the period of National isolation and was constructed by a 2nd generation Chinese Monk from the Kofukuji Temple in Nagasaki which is the oldest Chinese Temple in all of Japan.

The Spectacle Bridge is so aptly named because it resembles a pair of glasses when the evening shadows are reflected on the surface of the river below.  The Bridge is regarded as one of the three most important bridges and construction engineering feats of its time.

The area now is a major attraction in Nagasaki City.  Retains a lot of its history and has many cafes and restaurants nearby.  Well worth a stroll and also a photo or 2 along the way.


Please check out Nagasaki Spectacle Bridge here on a map:

Check out the video below of the Nagasaki Spectacle Bridge:

Posted by Tour Nagasaki at 5:44 AM No comments:

The Nagasaki Rose Festival is on once a year from the beginning of June for approx 2 weeks at Nagasaki's one and only truly international event.  The amazing Huis Ten Bosch in Nagasaki comes alive with Roses aplenty to satisfy everyone, green thumbs especially!   But even if you are no gardener you can still come and enjoy, ponder and express your thoughts at this. all things Roses orientated event.

The Rose Festival attracts visitors from all over the world who are attracted by more than 1 million roses and there are around 1000 different varieties which are spread out all over the town in a splendid and tasteful presentation.  The night time light up was as spectacular as anything I have seen recently, the direct light on the roses really showed their natural hues to perfection.

For me, who isn't a true gardener of sorts, just to stroll around and check out all the different colors and species of Roses was a real eye opener.  In some ways i thought i should try and be more active in the garden and will endeavour to do so in the future.  As for the real enthusiasts, I marveled at the amount of people who came, the amount of photographs they took and their passion for all things flowers.  Truly an inspirational experience!!

A must for any garden and especially flower lover who may find themselves in Nagasaki at the beginning of June.

Check out the Nagasaki Rose Festival at Huis Ten Bosch on a map! 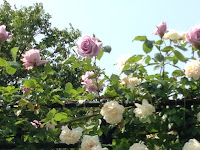 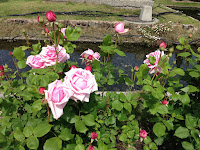 Posted by Tour Nagasaki at 7:11 PM No comments: