Kuchinotsu Port Nagasaki was one of the first modern ports in Japan that accepted foreign traders. After the arrival of the first Portuguese ship to Japan in 1543 and the introduction of Christianity six years later, the Daimyo (feudal lords) in various parts of the country began to welcome the Portuguese ships into their ports in order to promote trade and in some cases Christianity.

During the Age of Exploration, Portuguese trade ships left their mother port of Goa (India) and sailed to Nagasaki via Malacca, Macau and other Far East ports, finally returning to Goa after about three years.  Goods imported to Japan by the Portuguese ships included raw silk, silk fabric, cotton and woolen cloth, ivory, coral and sugar.  At the entrance of the Kuchinotsu Port Nagasaki is a statue depicting what the Portuguese looked like according to the Japanese in the day.  It is quite a sight to see the features being exaggerated beyond belief!

In 1865, the Portuguese moved to Kuchinotsu Port on the Shimabara Peninsula.  With its sheltered entrance and deep water and friendly locals it was well received as a great landing place.  In 1571 however, Kuchinotsu lost its status as Nagasaki's No 1 Port as Nagasaki Harbor opened.  Portuguese ships arrived here along with a chartered Chinese ships, thus marking the opening of Nagasaki Harbor for foreign trade making it the port of choice which it still retains today.  Kuchinotsu Port Nagasaki whilst still being a beautifully maintained deep water port pretty much has slipped into oblivion and is just a very sleepy coastal town and though it has remained a scenic beauty it really doesn't have anything to entice travellers to come and see its wares.

Check out Kuchinotsu Port Nagasaki on a map! 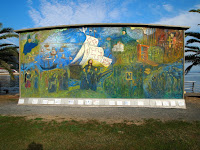 Posted by Tour Nagasaki at 9:55 AM